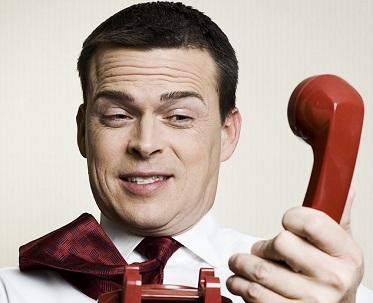 If a salesperson had a process that was so good that every time they talked to a prospect on the phone they got a decision, then it would be easier for them to make more calls; they’d have more appointments; they’d accelerate their sell cycle; they’d close more deals; they’d make more money; they could have more time off; they’d certainly be happier being in sales and they’d be more efficient!  Being more efficient means having a system for making phone calls.  So, I’m going to share the one people pay thousands of dollars to hear about in our training:

Step 1 – “Pattern Interrupt Greeting”
You’re going to do something as soon as they say “Hello” that stops them in their tracks, but in a really good way.  For example, “Hi Frank, it’s Greg, am I catching you at a good time?” They aren’t expecting that and it makes them pause from what they are doing and listen!  Once you have their attention, you can set an agreement for what’s going to happen during the phone call.

Step 2 – “Mini-Agreement”
“I sent you the proposal and left you a couple of messages.  I haven’t heard from you, so I wanted to catch up with you and see if you’re still interested or if you’d like me to close the file on this one.  Are you okay if we discuss it and make a decision, Yes or No, and No is okay?"  I know you probably hate that, but think about it.  You’ve left several messages, it’s been several weeks.  The prospect started off HOT and hasn’t e-mailed or replied to your calls after you sent the proposal.  So now, he’s no longer HOT, he’s COOLed off.  So, what’s the best way to get a decision instead of a put-off, a ‘think it over’ or a maybe?  You guessed it, make it “okay” for him to say NO!

Step 3 – “Meaningful Conversation”
“So I get the feeling you’ve decided to go in a different direction, is that right?" Again, he’s COOL not HOT, so what is the best way to get him moving?  To push him towards the negative and let him come back fighting!  Yes, it takes guts if you’ve never done it before.  Remember, you can’t lose what you don’t have and right now, you’ve got nothing.  So, what do you have to lose - nothing!

Step 4 – “Outcome”
Here’s where you get a decision.  If they resist, gently remind them of the mini-agreement that they agreed to at the beginning of the telephone call.  It could sound like this, “So, based on that we’ve talked about it sounds like we have three choices.  We can start to work together, or meet to talk about it, or close the file and part as friends.  Could you be nice enough to share with me which one of these makes the most sense to you?” You might make a sale, you might get an appointment to make a sale and you might get a “closed file”, but you won’t get a “maybe” or a “think it over”!  The more “maybes” and “think it overs” you have, the less money you are making.  The more times you hear “no”, the closer you are to a “yes”.  Sales people that get “yes's” and “no's” are the MOST effective!

This Four Verse Phone Call approach works on every call you’ll ever make in sales!  The words may change, but the process is the same and you’ll get decisions all the time.  Use it and you’ll be more successful in sales!  Use it and I’ll see you at the bank more often!

If you're not satisfied with your sales, we invite you to participate in one of our workshops for FREE as our guest - along with paying clients. In other words, these are real training workshops, not promotional programs.

Greg Nanigian is CEO of Greg Nanigian and Associates, affiliate Sandler Training.  Over the past 27 years, we've helped thousands of sales professionals and organizations optimize their selling strategies, increase profits and create lasting relationships with their customers.