Three Stages of the Dummy Curve

In one of our previous blogs we put the "Dummy Curve" into action, showing how being a "dummy" can help you in the sales process. We showed an example, using a young, inexperienced salesperson named Carlos, who had great results when he didn't know much about what he was selling, terrible results after getting trained on the products, and then good results when he returned to being a "dummy". The moral of the story is: Carlos became a better salesperson once he reached the final stage, realizing he could use the dummy approach to his advantage. 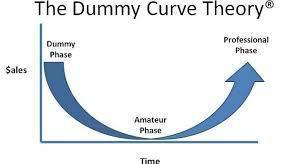 Carlos went through each of the three stages. The first stage was the genuine dummy stage. Carlos was new, and didn't know anything about heaters, but his attentiveness and willingness to listen to the prospects' problems propelled his ability to sell. The second stage was the amateur stage. He went to heater school and came back an expert on many different products and was eager to show everybody his new-found knowledge. Unfortunately, that didn't work out too well. After some careful self -analysis, Carlos entered the third stage, which we call the professional stage. It's where Lt. Columbo spends his time solving crimes, and where true sales professionals spend their valuable time.

Remember: In the professional phase, Carlos injected a little Lt. Columbo into his more knowledgeable and skilled approach. He pretended he didn't know as much as he did. Returning to the dummy stage, only this time, he was a dummy on purpose.

What were those "dummy" things? Acting vulnerable, asking questions, admitting lack of understanding, and asking the prospect for help. We call these kinds of things "dummying up." Every time Carlos played dummy, he gathered more information, information that led him to the prospects' problems, concerns, goals, and ultimately pains. This is the meaty stuff that makes for effective sales. What if you were to do what Carlos did and become a "dummy" again?

Please fill out the form below to read the full article: